My wife of fifty years a beautiful Mod girl was killed in a tragic accident last weekend, she was my inspiration and a true Mod until the very end. I will put on Mod Generation a very short story of how we met written in the depth of my darkness but bringing back those wonderful days of the 1960's

Following my novella August '64 about a Southend on Sea Mod, I have followed this up with a second novella , Summer of '64, with a crossover of characters from both stories

Clacton during Easter Bank Holiday in 1964 had been the coldest on record for over 100 years and a thoroughly dismal weekend but now as Whitsun approached the weather had improved and the Mods were all waiting to find out which would be the next seaside town to be invaded.

For one of the original Hasting’s Mods, Stu Barnes the forthcoming weekend was to change his life in more ways than one and turn his world upside down, complicated by a love affair that crossed tribal boundaries.

I would thank everybody that commented on my previous novella. 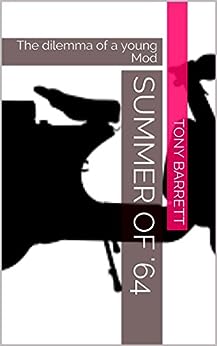